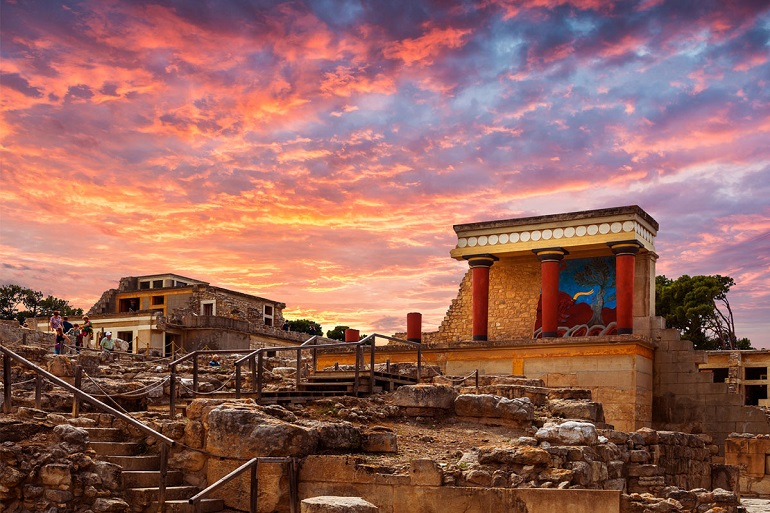 Fly and drive itinerary throughout Crete

- Chania . Upon landing in Chania airport you will pick up your car and start to explore the city .
Chania is the second city of the island with about 55,000 inhabitants. It is considered one of the most beautiful city of Crete, thanks among others to its Venetian port and its lighthouse from the XVth century. See the covered market, the vicinity of the Splantzia behind the port and the Greek orthodox cathedral.
Accommodation in Chania in Hotel Arkadi

After breakfast you will start heading east towards Rethymno . The distance is 60km

- Rethymno . The city of Rethymnon was built in the antiquity and keeps until today many traces of its historical past thanks to the Venetian and Turkish ruins that are still standing there. To discover : the old city that dates quite entirely from the Venetian time, the old port with its picturesque houses and its numerous taverns, the venetian loggia from the XVIIth century and the venetian fortress from the XVIth century.

Accommodation in Rethymno at Hotel Brascos

After breakfast you will continue your journey heading south to the Village of Aghia Galini . Distance is 82,00 km .

- Plakias :
Plakias is located in southern Crete, about 30 minutes' drive or 35 km south of Rethymnon. The houses of Plakias hug a large crescent-shaped bay, with most buildings near the small harbour.
Plakias began to expand after 1970; before that, there were no more than 10 houses. Today there are many small hotels in Plakias, apartments and tavernas to meet the needs of the multitude of summer visitors.
You will find all you need in Plakias, as there are many shops and supermarkets, car rental agencies and tour agencies. However there is no bank, so make sure you have plenty of cash or your credit card with you.
The beach of Plakias extends east from the village. It is one of the biggest beaches in Crete, offering a sense of space and comfort to suit every taste - the east end is mainly used by naturists. There are showers all along the beach and many parking spaces.If it's windy during your stay in Plakias and the northern wind whips you with flying sand, head west to Souda beach. It is more sheltered, with small hotels and a few tavernas.There are other lovely beaches near Plakias at Damnoni, Amoudi and Mikro Amoudi, which is also a naturists' beach. A little further away are Lefkogia and Schinaria, the preferred beach of scuba divers. The beach of Preveli is also excellent.For those of you, who enjoy scubadiving, there is a diving centre at the Hotel Calypso near Plakias.If you're staying in Plakias, you'll soon get to hear about the date palm forest and the lake at Preveli. This is one of the most famous sights in Crete and an area of outstanding natural beauty.The date palms stand along the bank of the river which flows down through the Kourtaliotis gorge (you have to drive up the gorge to get to Plakias), creating an exotic scene.Wander along the paths in the palm forest, relax in the shade of the trees and have a dip in the river.At the spot where the river reaches the sea, there is a beach with umbrellas and a soft drinks canteen. The area is usually full of visitors who come here either by car or by small boat from Plakias and Agia Galini.If you come by car you can also visit the nearby Moni Preveli (Preveli Monastery), but then you have to walk down a lot of steps to reach the beach and you'll be pretty puffed going back up.In August 2010 the Preveli palm forest was burned by wildfires, but it managed to recover in a very short period. We all hope that a similar tragedy won't repeat in the future.

Agia Galini, holiday pearl on the south coast of Crete, is a friendly harbour village that can easily be reached by car. Approximately one and a half hour from Heraklion and Chania you can find the real Cretan culture, lifestyle and cosiness. Enjoy your stay in different types of accommodation and taste the great variety of taverns, restaurants and bars.
You can take a swim, enjoy the blue flag beach, try water sports or go for a long and quiet walk in the mountains. Due to it's central position Agia Galini is also the perfect base to explore the wonderful south coast and the many nearby ancient Greek sites and villages.

- Ierapetra
Ierapetra is known as the most southern city of Europe facing the Lybian Sea. The city is made of two distinct parts, the old city located on the hills, its medevial and narrow streets with a very rustic atmosphere where one can find the mosque and the “house of Napoleon” and the new city, modern and very lively.Chrissi is an uninhabitated island quite accessible for one day excursions departing from Ierapetra. The island is well-known for its white sandy beaches and its virgin nature.

Accommodation in Ierapetra at hotel Astron

- Sitia
Sitia is a picturesque town, built in an amphitheatre shape beside the sea in the Gulf of Sitia.Our town is situated on the north-eastern edge of Crete. It has a population of 9000 inhabitants and it is economically and administratively the centre of its own Province. Sitia includes an airport, and a shipping port with connections to Piraeus and the islands of the South-East Agean. Sitia is well known for its clean beaches with rich sand, many awarded the distinction of Blue Flag status. The people of our town are welcoming to visitors and are always ready to celebrate in true Cretan style. Sitia is famous also for its excellent wine.

You will pass by Ag. Nikolaos being a very animated city in the summer and in the fall. In the centre there is a very charming small lake, surrounded by taverns, bars and shops.
Elounda is located 12 km north of Ag. Nikolaos, in the bay that has the same name. The hinterland offers to the travellers a remarquable sight on the Gulf of Mirabello. In the high seas, you can see the island of Spinalonga and its fortress particularly well preserved.

Accommodation in Sitia at hotel Flisvos

- Heraklion . Heraklion is the capital of Crete. Occupied by the Byzantin Empire, the Arabs, the Venetians and the Ottoman empire, it offers to the visitors much diversified architecture representative of the city’s history. See the old port and the Venetian arsenal, the market and the archaeological museum with the most important collection of Minoan items. Knossos is located a few kilometers away from Heraklion and includes the palace of King Minos, the most important of the Minoan palaces, discovered in 1878 by the archaeologist Arthur Evans. The splendor of the very well preserved site makes an excursion there essential for all travellers visiting Heraklion.

Day 8 :
- Heraklion – departure Return of the vehicle at the Heraklion airport. Departure flight or stay in a hotel in Heraklion or surroundings.