Meteora is the biggest and most important group of monasteries in Greece after those in Mount Athos. We can locate the first traces of their history from 11th c. when the first hermits settled there. The rock monasteries have been characterized by UNESCO as a unique phenomenon of cultural heritage and they form one of the most important stations of cultural map of Greece.
The most important monasteries of Meteora are:
- The Holy Monastery of Great Meteoron. It is the biggest of the Meteorite monasteries. The church 'Katholikon', honoured to the 'Transfiguration' was erected in the middle of 14th c. and 1387/88 and decorated in 1483 and 1552. The old monastery is used as a museum, nowadays.
- The Holy Monastery of Varlaam is the second, after the Great Meteoro, big in size monastery. The church, honoured to the three Bishops, is in the Athonite type (cross-in-square with dome and choirs), with spacious esonarthex (lite) surrounted by dome as well. It was built in 1541/42 and decorated in 1548, while the esonarthex was decorated in 1566. The old refectory is used as a museum while North of the Church we can see the parekklesion of the Three (Bishops) built in 1627 and decorated in 1637.
- The Holy Monastery of Rousanou. It is dedicated to 'The Transfiguration' but honoured to Saint Barbara. The 'Katholikon', in the Athonite type, was founded in the middle of 16th c. and decorated in 1560. Both, the Katholikon and the reception halls are in the ground floor while the 'archontariki', cells and subsidiary rooms are scattered in the basement and the first floor.
- The Holy Monastery of St. Nicholas Anapausas. It is the first to meet on our way from Kastraki to Meteora. The 'Katholikon' dedicated to St. Nicholas, is a single - nave church with small dome, built in the beginning of 16th c. It was decorated by the Cretan painter Theophanis Strelitzas or Bathas, in 1527.
- The Holy Monastery of St. Stephen. It is one of the most attainable as we don't have to cope with innumerable stairs to reach it. The small single-nave church of St. Stephen was built in the middle of 16th and decorated in 1545 or a little later. The 'Katholikon', honoured to St. Charalambos, was built in the Athonite type, in 1798. The old refectory of the convent is used as a museum nowadays.
- The Monastery of Holy Trinity is very difficult to reach. The visitor has to cross the valley and continue high up through the rock before we arrive outside the entrance. The church is in the cross-in-square type with the dome based in two columns, built in 1475-76 and decorated in 1741. The spacious barrel - vaulted esonarthex was founded in 1689 and decorated in 1692. A small skeuophylakeion was added next to the church in 1684. 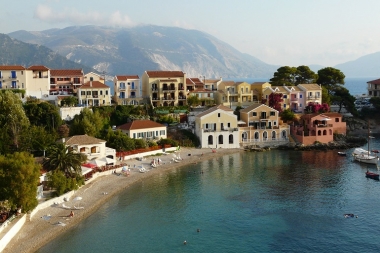