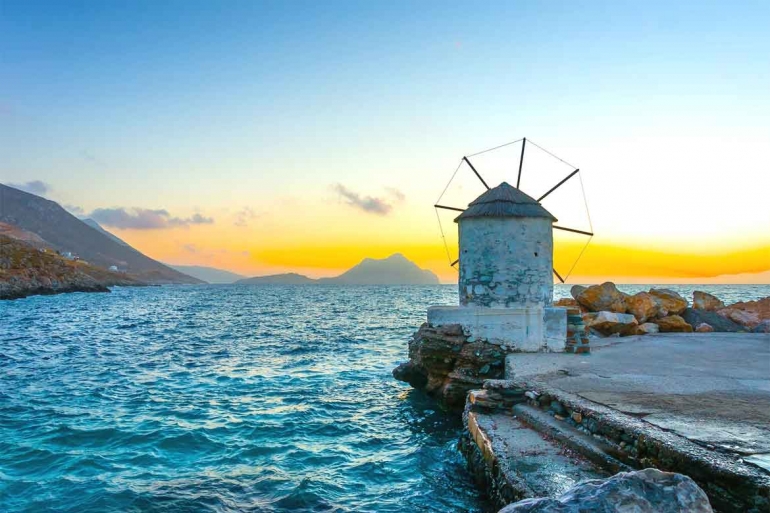 In the middle of the ´big blue´, with splendid natural beauty, simple architectural design in its settlements, hospitable inhabitants and a rich cultural heritage, Amorgos resists the rhythms of the new age, surprising pleasantly and enchanting every visitor.

All visitors are attracted by the explicit aura of this place and become fanatic admirers. Amorgos is not taking part in loud advertising campaigns. Distinctively it is advertised from mouth to mouth, to a public that searches for authenticity, simplicity and  harmonic coexistence of nature and tradition.

Its visitors arrive as tourists and depart as friends, having carried in their luggage precious memories and  an expectation to return the following year.

Amorgos is literally placed in the middle of the deep blue sea. It is positioned southeast of Naxos and is the most eastern island of the Cyclades. The island has an elongated shape, covering 121 square kilometres and a population of 1880 inhabitants, who are mainly occupied in the shipping industry, fishing, sponge diving, farming, animal raising and tourism.

The name Amorgos probably came from the plant amorgos, locally known as linokalami, a scarce herb that in the ancient times was the natural material for the amorgian tunics.

The capital of the island is Hora. It is built away from the sea, in order to be at a safe distance and protected from the pirates. Here, narrow cobbled streets, small whitewashed houses with blue windows, double storied mansions and dozens of churches, along with the windmills on the top of the hill, create a picture of simple beauty that attracts the visitor.

The port of Hora, in the western coast of the island, is called Katapola. It is the best natural harbour of the Cyclades and is comprised  by three settlements, Katapola, Xilokeratidi and Rahidi.

The characteristic Cycladic architecture of the settlements, the crystal clear waters of the gulf in all nuances of the colour blue and a little further the valley with the small plantations and the olive trees, enchant the visitor, while various forms of accommodation and shops, can cover all needs for a comfortable stay.

At the north part of the island, one can find the area of the ancient city of Aegiali, with its small gulf, island's second port and a tourist centre,  along with the other three picturesque settlements: Potamos, with a panoramic view over the port, Langada, built amphitheatrically over the valley of Aegiali and Tholaria with its cobbled streets and the arches.

From town, the road towards south, leads to the area of Kato Meria, which retains its traditional farming character. Here you will find the settlements Kamari, Vroutsi, Arkesini, Kolofana and Kalotaritissa, along with the superb beaches of Mouros, Amoudi, Kato Kambos, Paradisia and the gulf of Kalotartisas which is a safe haven for fishermen.

The morphology of Amorgos is very distinct and is offered for mountain walks. Until the end of the 1980s, these mountain paths where the main routes of contact in between Amorgos's villages.Today, six main walking paths have been mapped and signed, targeting to familiarize the visitor with the most impressive treasures of the island.

Amorgos is also famous, in the whole of Greece and abroad, for its therapeutic plants and hebs. The mountain slopes are not only full of impressive wild flowers, but also of plants which have been known for their therapeutic attributes since antiquity. A walk in the paths of Amorgos gives the chance for acquaintance with this natural wealth.

Another characteristic of Amorgos is the intense traditional colour, which does not only concern its settlements, but also the life of the residents. If you visit Amorgos, try to participate at a feast or festival. The rich popular customs, music and dances will definately compensate you, while at the same time you will also have the oportunity of trying the tasty Amorgian cuisine.