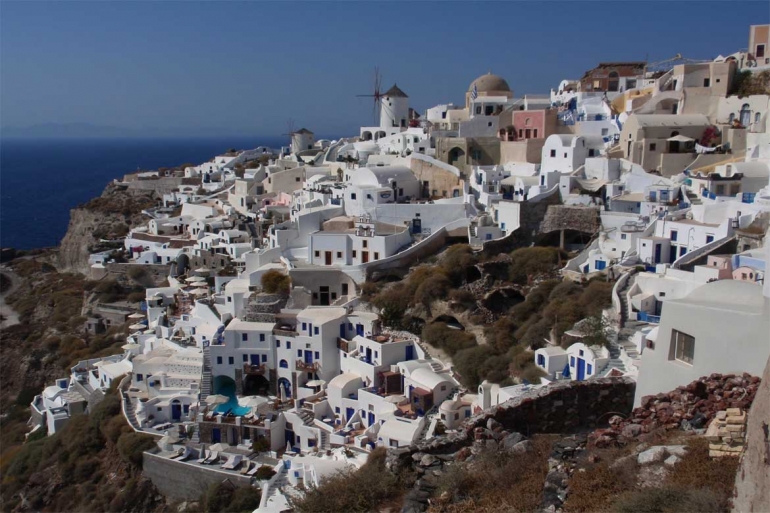 Ios is truly one of the most beautiful islands of Greece. Its long golden beaches, clean sea, secluded beaches and its intense night life have made the island internationally known as the island of youth. However Ios, which has been connected with the name of the poet Homer, has still a lot to offer to visitors apart from sun, sea and entertainment, since it combines cosmopolitan life with the rich Cycladic tradition.

Ios or Nios has an extent of 108 square kilometres and a permanent population of 2000 residents. The name probably came from the “ion” (flower), since the island was full of flowers in antiquity.

Arrival at the Harbour of Ios, with the beautiful church of Agia Irini on the right and the beach of Yalos on the left, offers a very beautiful picture and the best welcome for the visitor.

The majestic Hora is the capital of the island, and is amphitheatrically built on the hill above the harbour. Here,classic Cycladic architecture dominates in all its splendour: narrow streets, whitewashed houses with thick stone walls for protection from the cold and the blinding sun of the Aegean, small paved squares with sprigs with drinkable water and many churches. The ancient city of Ios was located at the place where Hora is built today, on a steep hill above the harbour. Parts of the defensive walls, a building, the street to the harbour and the temple of Apollo are still visible today.  The temple of Apollo was located at the place where the church of Agia Ekaterini is found. Between Agia Ekaterini and in the church of Agioi Anargyroi is where the market of the Ancient city was. Rich discoveries from the prehistoric until the roman years are found in the Archaeological Museum of Hora. Walking up the hill on the east of Hora , we meet another one from the numerous beautiful sights of Ios: the old white windmills, and the Open Theatre “Odysseas Elytis”, a masterpiece of architecture made of stone and marble, built to one of the poets beloved places, with an amazing view. The most characteristic picture of Hora is the church of Panagia Gkremiotissa, with the palm tree and the amazing view towards the bay, the island of Sikinos and the immense blue Aegean Sea. Its there that the visitor has the chance to see the best sunset of the island.

The archaeological site of Palaiokastro, where you will see  a Byzantine fortress, (height of 2,5 m.) and the church of Panagia Paliokastritissa built on the fortress, is a place of great interest.

Magganari found on the south part of the island, is one of the most beautiful regions of Ios. Seven continuous beaches with golden sand await for you here. It is not accidental that scenes from the film “The Deep Blue” were filmed here.

One of the most beautiful sights of Ios is the Windmills. They are found on the east of Hora, on the Theatre hill and are very picturesque.