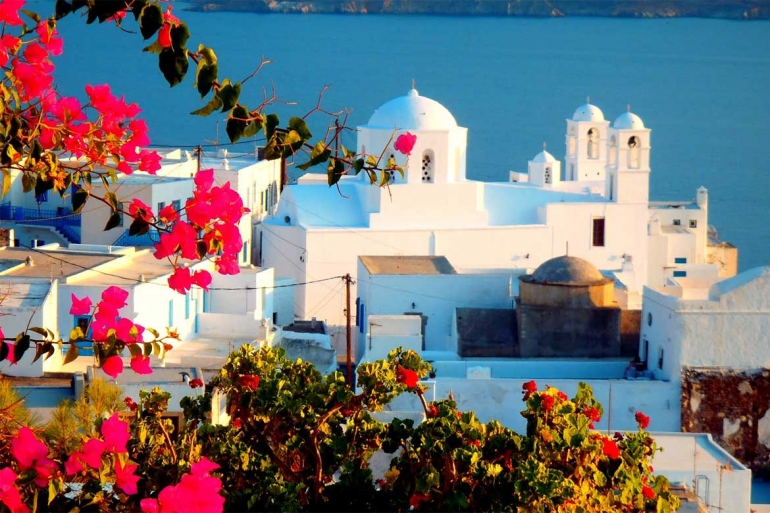 Milos is found in the south-western utmost of the Cyclades. It is the island that became famous from the eminent statue of Venus. Milos is an impressive island, with unique nature and rich history. Its volcanic past, astonishing white, red, yellow or black rocks that you don’t meet elsewhere in Hellenic space, and a crystal clear sea that centuries now sculpts its coasts and caves, create a fascinating combination with landscapes of astonishing beauty: Kleftiko, the cave of Papafragka, Sarakiniko, Arkoudes. Moreover, Milos is found in the centre of an archaeological and religious world of interest thanks to her famous Catacombs and Fylakopi with Venus.

Capital of the island, built at a height of 200 metres above the gulf of Milos, is Plaka, one of the most picturesque settlements of Cyclades, with whitewashed houses and balconies full of flowers. A castle and many churches exist in Plaka.

The port of Plaka is Adamas, one of the safest and larger harbours of the Mediterranean, well protected in the gulf of Milos, with beautiful houses and narrow streets. The church of Koimisis of Theotokos, the catholic temple of Agios Nikolaos, the Museum of Minerals and the Ecclesiastical Museum, that is accomodated in the one thousand year old church of Agia Triada are included in the sights of Adamas. At a small distance from Adamas, the coast Papikinou will give you the occasion to enjoy swimming but also sea sports.
On the north-eastern utmost of the island Apollonia or Pollonia is found, a beautiful summer centre with taverns where you will find abundant fresh fish and seafood. At the centre of east Milos Zefyria or Hora is found. It was the medieval capital of the island until 1767, when it was destroyed by earthquakes and various illnesses.

The best way to get an acquaintance with the enormous natural and cultural wealth Milos is to walk in the old paths of the island. The most virgin region is western Milos, which the visitor can get to know through hiking routes of small or medium difficulty.

Another way to get to know Milos by combining your vacations with adventure, are the dirt roads. The network of dirt roads of Milos is the largest in Cyclades and it offers a chance for visitors to get to know unknown corners of the island and to come in contact with the wealth of its nature.